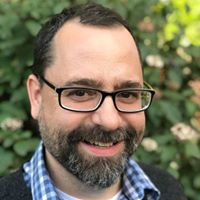 Debbie:  Patrick, please tell us a little about yourself.

Patrick:  I grew up in North Bend, Washington, a small town east of Seattle (and home of the TV show, Twin Peaks). It was a beautiful, dark, wet place to live. My dad was born and raised there and my mom was from Uruguay in South America. They met when he worked there in the Peace Corps. So I grew up in a bi-lingual household. I was a band nerd in high school and theatre major at the University of Washington. I was a public teacher for a lot of years in southern California and in the Seattle area. A few years ago, my wife, Emma, got a great job at UMich so we moved to Ann Arbor from Seattle. I'm currently an early morning writer and a stay-at-home dad to two zany little boys. I'll be back teaching kids as a reading tutor at my sons' school next school year. 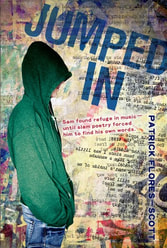 Patrick:  I was teaching struggling middle school readers when I was inspired to write my first book, Jumped In. I had been a struggling reader growing up so I set out to write a book that might appeal to older students who find it difficult to get through a novel. I based the characters on students and staff I saw every day at that school. The story focuses on two very different boys who try to get through school without being noticed, which they manage to do until they team up for a class poetry slam. One boy tells the story in first-person prose. The other tells his story through poetry. It's a short book, with short sentences and short chapters. The vocabulary is very accessible.  I get reports from teachers that it's been the first completed novel for many middle and high school reluctant readers. Jumped In has its own story to tell, but I'm so proud to have written a book that, for a few students, has launched them the world of novels. Jumped In won the Washington State Book Award for YA and was an NCTE Amelia Walden Award finalist and a nominee/finalist for Michigan's Great Lakes/Great Books.

When my agent started selling Jumped In in the fall of 2009, he encouraged me to get started on a new book. I decided I wanted to write about a family dealing with the big issues of that moment in time. I got to work on a story about a kid, Teodoro, 'T' Avila, whose once-middle class, once happy family has been blindsided by war and job loss and the loss of their new house. T checks out in school and is failing until he reunites with an old family friend, Wendy Martinez, a high school junior who has her act completely together. She's smart and headed to college so, in his junior year, T attempts an academic one-eighty for a shot at love. T needs his family and they need him, but he struggles to overcome and escape a chaotic, depressing home life in order to achieve. The book is called American Road Trip and it'll be out in September from Christy Ottaviano Books at Henry Holt.

Sandwiched in between those two projects, I had a short story come out in a MacMillan YA collection called, I See Reality. My story, "The Good Brother," is about twin brothers who where brought to the U.S. from Mexico by their parents, but at different times. They both think they're eligible for DACA, but it turns out one brother was brought over before the deadline for DACA and the other brother was brought over after the deadline and is now facing deportation. I was writing based on what I felt were the shortcomings of DACA and immigration policy in the Obama era. Times have sure changed.

Patrick:  I'm working on a slam poetry novel (Is that a thing?) about a kid, Antonio, who is being released from a youth prison. He's released on a Friday afternoon. He has a meeting at school with his parole officer and his guidance counselor on Monday morning. He has to make that meeting as a term of his parole. If he doesn't make it, he'll likely be sent right back to prison. The story is about a bunch of craziness with family and old friends that happens between Friday afternoon and Monday morning that threatens to keep him from making his meeting. And may send him right back to prison. 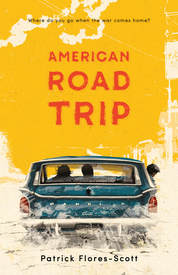 Patrick:  I'll be at the Detroit Festival of Books on July 15th, and the Harbor Springs Festival of the Book at the end of September. Other than that, no firm dates but I'll be working on book launch details in the coming months.

Patrick:  I live in Ann Arbor, so this is a tough question. I spend a lot of time in Nicola's with my kids and the folks there have been really supportive of me and Jumped In. They seem to carry just about everything that comes out in YA and kids' books. I love Literati and have to check it out every time I'm downtown. The upstairs cafe is my favorite writing spot in town. Bookbound is a sweet store where the owners are the sellers so it's a great, personal experience.

I love writing in the fireplace room in the new Westgate library. It's super cozy. That whole library is amazing. My regular spot is the Mallets Creek branch, which has great lighting and is so close to our house. We've spent a lot of time at events in the main downtown branch and the kids have done plenty of story times there and at the Pittsfield branch. Those story times were life savers for this dad when the boys were toddlers.  I'm grateful for the libraries as a citizen and for their support as a writer.

Patrick:  Indoors, it might be the Diego Rivera pavilion at the DIA. That place is magical. He hung from those very walls creating that mural! My youngest son, Diego, is a big fan. Outdoors, we love the Mill Creek walk in Dexter and have enjoyed a few weekends at Lake Michigan. We have yet to head to the U.P. Hopefully, this summer we'll get up there.

Patrick:  There are no fireflies back home in Washington state. The arrival of the fireflies is a big deal in our Michigan household. My wife and I get as excited as the boys do. We're fans of Ann Arbor's nutty FestiFools and the very inclusive 4th of July parade.

Patrick:  I have met wonderful book folks since moving to Ann Arbor. Members of my book club and critique group, writers, public school teachers, Ann Arbor and Dexter librarians... Shutta Crum, Nancy Shaw, Cynthia Furlong Reynolds, Debbie Gonzales, Jeff Kass…these are a few of the folks who represent so many books and poems and articles written and so many kids inspired and taught. At one time or another, I’ve felt welcomed, mentored and inspired by this amazing group. 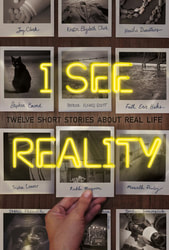 Patrick:  All right, non-Michigan folks: A Coney Island is a diner that serves all the classic American diner stuff. But to truly deserve the “Coney Island” label, it must also serve the Michigan version of a Coney Island-style hot dog. The menu will likely include some Greek options. But if you’re in the Ann Arbor/Ypsilanti area, along with pancakes, eggs and cheeseburgers, your favorite diner or Coney Island might serve Korean food (like bi-bim -bop, kimchi and bulgogi at Bell’s Diner) or Honduran friend chicken and fried green plantains (Antonio’s Coney Island). Do not dismiss the Coney Island, people.

Oh, and Detroit-style thick crust pizza is a thing. It is square or rectangular and the crust contains both very crunchy and very chewy layers. If you enjoy eating pizza with the label “New York” or “Chicago” attached to it, you need to know that Detroit makes a pizza that is second to none.

Patrick:  I’ve been an “ian” my whole life up to now. I’m a born-and-raised Washingtonian. I also spent a stretch as a Californian. Now, I’m enjoying my time as a Michigander.

Debbie:  Patrick, we'll add you to the Michigander column!  Thank you so much for joining us today for Michigander Monday.
Posted by Debbie Diesen at 12:01 AM
Email ThisBlogThis!Share to TwitterShare to FacebookShare to Pinterest
Labels: Michigander Monday, Patrick Flores-Scott

Great interview with an author I already admire. Looking forward to American Road Trip, and your WIP progress sounds great too, Patrick. Thanks for the inspiration!