OK, Midwesterners, Get Out Your Calendars! 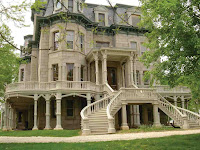 Saturday, April 2, you've got two choices:
If you're closer to Lansing than Chicago, head to Rally of Writers, with Jef Mallett, Bonnie Jo Campbell, Lev Raphael, and more!
If you're closer to Chicago than Lansing, James Kennedy has got you covered.  At a mansion.  A mansion!  If I could be two places at once, I would be.  Indeed.
And if you're not in the Midwest?  Well, what's stopping you???  We're a friendly part of the nation.  Pay us a visit!  Lots to see here, and Michigan has, count 'em, two peninsulas.  State pride.  Yup.  Got that, too.
So.  Saturday, April 2.  Two choices only.  Rally of Writers.  Mansion of Odd-Fish.  Your choice.  See you there!
Posted by Debbie Diesen at 7:11 PM 3 comments:
Email ThisBlogThis!Share to TwitterShare to FacebookShare to Pinterest
Labels: Hegeler Carus Mansion, James Kennedy, Rally of Writers, The Order of Odd-Fish

Sorry for the radio silence on the blog lately.  It's been an extremely busy stretch off-blog.  But I'll be back soon!  In the meantime, check out some of the other blogs in the sidebar (you have to scroll down a bit -- the list is down past the sidebar calendar).
Posted by Debbie Diesen at 2:43 PM No comments:
Email ThisBlogThis!Share to TwitterShare to FacebookShare to Pinterest
Labels: Excuses excuses excuses

After the 2011 Michigan Notable Books were announced in December, I posted on this blog a Michigan Notable Books Reading Challenge. It was something I’d meant to do the last couple of years, as a small show of support for the great books that come from Michigan authors; but I didn’t quite get organized enough to run the challenge those previous years. This time around, however, I managed to actually post about the challenge (rather than just thinking about posting about the challenge…) and I’m very glad I did! A large number of you – some of you living here in Michigan, some of you living in other states; some of you who’d heard of the Notable Awards before; many of you who had not -- took me up on my challenge of committing to read, at some point this year, two of the Notable Books. Thank you! I hope you are all enjoying your reading selections.

All of you who signed up were entered in a drawing for a $50 gift certificate to a Michigan independent bookstore. I recently drew the prize winner’s name; and, due to a kindly anonymous donation, I was also able to award a few second prizes. All of the winners have been notified and have picked their bookstores. Over the next couple of weeks, I’ll be profiling those bookstores, along with a few other Michigan bookstores you might like to know more about.

One of our second prize winners was Mary Jane Zako. For the reading challenge, she chose to read The Lord of Misrule by Jaimy Gordon; The Detroit Electric Scheme by D. E. Johnson; and Freshwater Boys by Adam Schuitema. Mary Jane has been an avid reader since she was a child and she is amazed at the number of excellent authors from Michigan. She is often pleasantly surprised to learn that a favorite author has Michigan connections. For her gift certificate, Mary Jane selected the bookstore McLean & Eakin.

McLean & Eakin is an independent bookstore located in Petoskey, Michigan. For those of you not from Michigan, Petoskey is a small town on the “north coast” of Michigan’s lower peninsula. Petoskey has a year-round population of about 6,000, though the quantity of people goes up seasonally. Located on Little Traverse Bay, picturesque Petoskey has a high concentration of Lake Michigan’s Petoskey stones and a well-deserved reputation as a summer vacation hotspot.

McLean & Eakin was founded by Julie Norcross in 1992 and is now owned by Julie’s son Matt and his wife Jessilynn. It’s a 5,000 square-foot, two-story general bookstore well-stocked with wonderful books in all genres. The store has an excellent children’s selection, many regional titles, a Hemingway section, and Staff Recommendations made by a well-read staff. The store hosts events and discussion groups throughout the year. Located in the walkable and scenic downtown Historic Gaslight District, the bookstore has strong and active ties to the community. Through their 10% for Schools program, McLean & Eakin has given more than $100,000 to local schools and nonprofits.

In 2000, McLean & Eakin received the Lucile Micheels Pannell Award. This honor recognizes bookstores that excel at creatively bringing books and children together. And in 2004, Julie Norcross was honored with the Haslam Award for Excellence in Bookselling, an award given to a bookseller who exemplifies the highest standards of excellence in the profession. Current co-owner Matt Norcross serves as Vice President of the Great Lakes Independent Booksellers Association board, and he will also serve on the American Booksellers Association board beginning in May 2011.

I had the great pleasure of visiting McLean & Eakin last fall for a bookstore story time and some area school visits. During my time there, I was thoroughly impressed by the bookstore, the store’s staff, and the entire community. And I’m not the only visiting author to feel this way: novelist Ann Patchett wrote an essay for the New York Times about her love of Petoskey and of McLean & Eakin. Read the essay, and then visit McLean & Eakin. If you can’t go in person, go by mouse! You’ll be very glad you did.
Posted by Debbie Diesen at 7:49 AM 4 comments:
Email ThisBlogThis!Share to TwitterShare to FacebookShare to Pinterest
Labels: McLean and Eakin, Michigan Notable Books, Michigan Notable Books Reading Challenge

Author and illustrator Aaron Zenz has a new picture book out from Walker, called Chuckling Ducklings and Baby Animal Friends.

Courtney will be at Schuler Books this Saturday, at the Eastwood location: details here.

A Rally of Writers

Registration information will be available soon on the Rally of Writers web page.

Hope to see you there!
Posted by Debbie Diesen at 6:35 PM 1 comment:
Email ThisBlogThis!Share to TwitterShare to FacebookShare to Pinterest
Labels: Rally of Writers

You never know what you'll find on a walk in the park.

The other day atop a snowdrift I spotted,

half in its sheath,


Hunting knife?
Fishing knife?
Weapon?
Of knives I know not.
I knew only

that I did not care to see it there.
I wanted to kick it away,
deep into the snow.


But children pass through.


It could not be left.


So I picked it up.
Awkwardly.
It was heavy in my hand.
I put it in my coat pocket.
I felt very strange.
I carried the knife, its hilt one down coat layer away from my hip,
until I looped around to the trash can
and un-found it.


Then I walked another lap.

that when the sun cuts into the surface of snow,
it sparkles
ever so beautifully,
and a little bit differently,
each and every time.

is what I found

at the park.
Posted by Debbie Diesen at 5:02 AM 1 comment:
Email ThisBlogThis!Share to TwitterShare to FacebookShare to Pinterest
Labels: Original Poems, Poetry Friday

The winners of my Michigan Notable Books Reading Challenge have all picked out their favorite Michigan independent bookstores for their gift certificates, and I'll have postings for you about those great bookstores in the course of the next week or so.

In the meantime, in other news, I'm happy to report that over on one of the blogs that I like to read, That's What She Read, I was one of the winners in a bloggiversary book giveaway!  I won two books -- yay!  Check out Michelle's blog and book reviews at That's What She Read and/or follow her on Twitter at whatsheread.
Posted by Debbie Diesen at 7:06 PM No comments:
Email ThisBlogThis!Share to TwitterShare to FacebookShare to Pinterest
Labels: Book Giveaways, Michelle Shannon

Thank you to all of you who signed up for my Michigan Notable Books Reading Challenge!  The number of participants far exceeded my goal, and far exceeded my expectations!  Thank you, all of you, for signing up, and for choosing to read some great Michigan-related books.

This weekend, I put all the names in the hat, and drew out a winner.  I also, due to an anonymous donor who funded some second prizes (thanks, Anon.!), was able to draw out some second prize winners.

Today I contacted all the winners.  With their permission, I will list their names and/or their bookstores of choice later this week.

For those of you who didn't win a prize, please know that I wish I had enough prizes for everyone who participated!  It was wonderful to see so much enthusiasm for and appreciation of the literature of Michigan.  Thank you, each and every one of you, for participating.

There's a nice interview with the wonderful Alyssa Eisner Henkin over at the Mother Write Repeat blog.  Head on over to read it!
Posted by Debbie Diesen at 6:55 PM 1 comment:
Email ThisBlogThis!Share to TwitterShare to FacebookShare to Pinterest
Labels: Alyssa Eisner Henkin 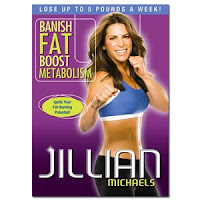 Even though I’m clumsy and uncoordinated and haven’t a speck of athleticism, I exercise regularly enough these days that occasionally I start feeling a bit complacent about it all.
Then along comes a workout DVD like this one and puts me back in my place!
Jillian Michaels’ Banish Fat, Boost Metabolism runs almost an hour and is nearly nonstop motion. If you’re anything like me, this fast-paced workout will get your heart pumping and Totally Wear You Out. But don’t let that discourage you: you’ll feel great when it’s over, and not just because it’s over.
The main workout consists of seven six-minute circuits (short warm-up precedes this; short cool down after). No equipment is required. The exercises are mostly done standing, but are interspersed with some mat work. The instructor, Jillian Michaels, is occasionally a bit much (and if you were to play a sports-drink drinking game by chugging some Gatorade every time she says “Don’t phone it in,” you’d definitely stay hydrated), but she’s got a certain charm to her, and she keeps you motivated.

Overall, a great workout. I will definitely be adding this one to my rotation.

Other reviews are here and here; and a link to the Jillian Michaels empire, er, web site is here.
Posted by Debbie Diesen at 5:42 AM No comments:
Email ThisBlogThis!Share to TwitterShare to FacebookShare to Pinterest
Labels: Fanish Fat Boost Metabolism, Jillian Michaels, Workout Reviews

A really neat blog that you should visit, if you haven't been there already, is Bookie Woogie.

Head on over and check out the kids' reviews and interviews, and their wonderful art!
Posted by Debbie Diesen at 4:51 PM 1 comment:
Email ThisBlogThis!Share to TwitterShare to FacebookShare to Pinterest
Labels: Bookie Woogie, Debbie Taylor, Nancy Shaw
Newer Posts Older Posts Home
Subscribe to: Posts (Atom)