Poetry Friday: In The Path

It is not, as it turns out,
a dead body.

Just a falling down, passed out, Friday morning drunk
who landed one pint of vodka short
of the park bench.
He lies on his side
in the chilly fall sunshine,
curved and curled
like a mammoth sleeping child.

--when they flutter open, ever so briefly, --


My head shakes.
Should not those eyes

be mineshafts to darkness?

Gateways to hardship?  Windows to pain?

Has he not
a story?

He has a name, after all.
The paramedics know it, already,
when they come to cart him away.
Surely, he's not just a drunk.
I am flawed enough, and ever so old enough,
that I know this by now.

And yet I'm relieved


to the very soles of my sturdy walking shoes


when the path is cleared

and I can carry on
once again


as if no drunks

ever dare to pass out

in the bittersweet glory 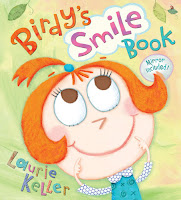 Laurie Keller has been with us previously for Michigander Monday, and today I am delighted to have her back for some Q&A about her latest book.  Laurie is a fabulous and unique talent, and her new book is marvelous fun.

Debbie:  You new book, Birdy’s Smile Book, is wonderful! Tell us a little about what inspired you to write it.

Laurie:  I wanted to write a book on smiling because I think it's something we don't think about that much yet smiling is something that can affect any given situation in a positive way. It's such a simple thing but it can really make a difference in how we relate to others -- strangers, friends, teachers, classmates, family, bill collectors, llamas, doughnuts -- I'll stop now but you get the idea. Birdy was the first KID character I ever used in a book thus far. I named her Birdy after my friend's next-door-neighbor who is nicknamed 'Birdy'. She was always telling me amusing stories about Birdy and when I decided to use a little girl character for the smiling book, I knew I wanted to name her Birdy because of her.

Debbie:  According to Birdy, someone who studies laughter is called a gelotologist. Is this really true?
Laurie:  It's TRUE! It comes from the Greek word gelos which means laughter. Gelotology is the study of laughter and humor and the effects of both on our bodies. Who knew?! I sure didn't until I started researching smiling and laughing. I still wonder though, like Birdy does, what someone who studies Jello© is called.
Debbie:  Birdy says if she were a food, she’d be cheese. You?
Laurie:  I'd be popcorn. It's one of my favorite foods and I think it'd be fun to experience the popping process.
Debbie:  Name a vegetable that makes you smile (I’m guessing it’s not broccoli).

Laurie:  Hmmm....I'll say onions. They're supposed to make people cry but onion is a fun word to say. It's got kind of a built-in rhyme: UN-YUN. And they sure smell good when they're cooking which makes me and my nose smile.
Debbie:  One of Birdy’s smiles travels all the way to Timbuktu. Where’s the furthest one of your smiles has traveled?
Laurie:  Well, the furthest I have personally traveled to deliver a smile is Thailand and Viet Nam. Who knows though where it has traveled from there. I did see a smile the other day when I was in Georgia that looked vaguely like mine so maybe my smile is working its way back to the states by now.
Debbie:  Top five things guaranteed to put a smile on your face?


Laurie:
*dogs riding in cars with their heads out of the windows
*my 5 year-old niece
*Christopher Guest movies

*walking in the woods

Debbie:  Will we be seeing more of Birdy?

Laurie:  Maaaaaaybe. I thought it would be fun to do a Birdy's Breakfast Book -- discussing the importance of eating breakfast. Though that may be a bit hypocritical of me because I rarely eat breakfast. BUT I have heard time and time again that it's very important for KIDS to eat breakfast so they don't run out of fuel before lunch. We'll see...I have a couple other ideas for Birdy...stay tuned!

Debbie:  I definitely will!  Laurie, having you here today has put a big smile on my face.  Thank you for stopping by!

To learn more about Birdy's Smile Book, click here; or view the trailer here.  And head over to Laurie's site here.

as if losing an old friend.

with all his heart,

“Because we’ve had them twenty years,”

I want to say.

“Because I’m tired of the same old big, bulky shelves.”

I feel a sigh billowing up inside me.

“It’s just time for a change.”

But I say nothing.

I watch him dust each shelf carefully.

are on their way,

if they’ve found the right crossroads.

It won’t be long now.

that have sat immobile all his life,

when he doesn’t think I’m listening.

I’m right there beside him,

how hard it is

Last three appearances of the year

It's been a busy fall!  I've had a wonderful time traveling to bookstores, schools, and libraries to share my books with kids and families.  But all things must come to an end, and I'm down to just a handful of events before I take a break from traveling for a while.

I've got a story time in Grand Rapids this Friday, and then my last story time of the year at Schuler Books Eastwood Towne Center on November 4 at 10:30 AM.

In addition, I'll also be at the Writers on the River Book Fair on November 14.  This is a fabulous event, with a ton of great authors (full line-up here).  Stop by if you can - there's something for everyone!

This is a good moment to pause and express my great thanks and gratitude to all of you -- kids and parents; grandparents; librarians; booksellers; teachers; and more -- who have been so welcoming to me at libraries, bookstores, schools, and book fests.  It's an honor and a true privilege to be a part of the book-life of children.  Thank you for letting me share in all that.
Posted by Debbie Diesen at 6:57 PM 1 comment:
Email ThisBlogThis!Share to TwitterShare to FacebookShare to Pinterest
Labels: Gratitude, Schuler Books, Story Times, Writers on the River

Doesn't this cover put a smile on your face? 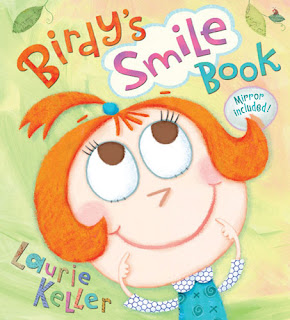 It's Laurie Keller's latest book.  Click here to learn more about it, and here for a past JTC interview with the fabulously creative Laurie Keller!
Posted by Debbie Diesen at 4:59 PM No comments:
Email ThisBlogThis!Share to TwitterShare to FacebookShare to Pinterest
Labels: Birdy's Smile Book, Laurie Keller

It’s fall. I know this because

the ants have stopped coming into my kitchen.
No more earnest invaders case the joint for spills and spatters
as they hatch a plot to drive me mad.
Victory,
late in the game,
is mine.
The ants have marched off
to wherever it is that ants go for winter.
Dead, or dormant, I know not, and do not care.

Yet I imagine them…


gathered deep in the earth…


their ant faces wrinkled and heavy with beard:

Together,
and each of them,
recalling kitchen glory days.

And all the bright sunshine


before fall.
Posted by Debbie Diesen at 4:11 PM 5 comments:
Email ThisBlogThis!Share to TwitterShare to FacebookShare to Pinterest
Labels: Original Poems

A Couple Of Nice Reviews

A couple of nice blog reviews just came out, at sites you might enjoy visiting.

An excerpt:  "The Barefooted, Bad-Tempered Baby Brigade is a thoroughly entertaining reminder for parents to savor every moment with their youngsters—babies don’t stay babies forever."

An excerpt:  "It is a rare occasion when my husband raves about a picture book...  So when he told ME to blog about this book because it’s GREAT, I have to say that I stood up at attention (figuratively as I was reclined in bed), and took note. "


I'm very grateful for the reviews!
Posted by Debbie Diesen at 6:59 PM 2 comments:
Email ThisBlogThis!Share to TwitterShare to FacebookShare to Pinterest
Labels: The Barefooted Bad-Tempered Baby Brigade, The Pout-Pout Fish in the Big-Big Dark

"Common Phrases And The Amazing Stories Behind Them"

What Have You Been Reading Lately?

Update 11/28:  Those of you looking for new reading ideas, I've finished this stack and a few more besides and now have a new "What Are You Reading" post up (including some thoughts on Twitter's "Friday Reads" feature).  So if you're looking for some new ideas for your reading stack, click here for my new post.  Or really, just head over to your library and browse the shelves like you usually do.  [Cue the "so many books, so little time" soundtrack...]  Then be sure to comment in with your latest suggestions. I'm always looking for something new and interesting to dive into!  Thanks.

-------
My poor neglected blog.  I've been quite busy lately with lots of storytimes and book events, including trips to great bookstores like McLean and Eakin in Petoskey and Literary Life in Grand Rapids.  More events are on the agenda for the next month or so, and then I'll settle into a no-event stretch over the winter.  My regular blogging will probably resume around that time.  Till then, it will continue to be spotty.

But as a placeholder for now (and to prevent dust bunnies from forming under my blog), I thought I'd do a quick blog entry about what I've been reading lately.  I hope you'll take a look at the links for these books (some are kids' books, some not), as you might enjoy reading them.
Currently on my reading stack (many of these selections inspired by meeting a bunch of nice authors at GLIBA), are:
What's on your reading stack?  What else should I add to mine?
Posted by Debbie Diesen at 6:27 PM 2 comments:
Email ThisBlogThis!Share to TwitterShare to FacebookShare to Pinterest
Labels: Reading
Newer Posts Older Posts Home
Subscribe to: Posts (Atom)