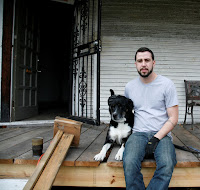 Debbie:  Drew, please tell us a little about yourself.

Drew:  My name is Drew Philp, and my journalism and essays have been published both nationally and internationally, including in translation, and have appeared in publications including BuzzFeed, the Guardian, and the Detroit Free Press, among others. I live in Detroit with my dog, Gratiot, in a formerly abandoned house I purchased for $500 with no plumbing, electricity or windows. I repaired it myself, and my book about the experience, A $500 House in Detroit: Rebuilding an Abandoned Home and an American City, will be published April 11.

Drew:  From the flap copy:

In 2008, Drew Philp, an idealistic college student from a small town in Michigan, withdraws from the comforts of life on a university campus in search of a place to live where he can make a difference. He sets his sights on Detroit, the failed metropolis of abandoned buildings, widespread poverty, and rampant crime, a complicated source of fascination often stereotyped and little understood. Arriving with no job, no friends, and no money, Philp is naively determined to fix the huge, broken city with his own hands and on his own terms. A year later, he saves up and buys a ramshackle house for $500 in the east side neighborhood known as Poletown and moves in.

Philp gets what he pays for. The roomy Queen Anne has been abandoned for a decade and is little more than a clapboard shell on a crumbling brick foundation, filled with heaping piles of trash (including most of a chopped up minivan), and missing windows, heat, water, electricity and a functional roof. The landscape of the surrounding neighborhood resembles an urban prairie: overgrown fields dotted with houses that haven’t been demolished or burned to the ground—some of them well-maintained by Detroiters who have chosen to remain in the city, but many, like the Queen Anne, left vacant and in complete disrepair.

Based on a Buzzfeed essay that resonated with millions of readers, A $500 House in Detroit is Philp’s raw and earnest account of rebuilding everything but the frame of his house, nail by nail and room by room. It’s also the story of a young man finding his footing in the city, the country, and his own generation. As he assimilates into the community of Detroiters around him, Philp guides readers through the city’s vibrant history and engages in urgent conversations about gentrification, racial tensions, class warfare through his first-hand experiences. We witness his concept of Detroit shift, expand, and evolve as his plan to save the city gives way to a life forged from political meaning, personal connection, and collective purpose.

Part social history, part brash generational statement, part comeback story, A $500 House in Detroit is an intimate account of the tentative revival of an American city, home by home and person by person—and a glimpse at a new way forward for generations to come.

Drew:  I’m currently working on a wordless “children’s book” with Italian illustrator Matthew Watkins. As for a next book of nonfiction, I have some irons in the fire but nothing set as of yet.

Drew:  My book release party is April 14, at Trinosophes coffee house, art gallery and performance space. The event begins at 7PM and is free. All are welcome, and I’d love to see you there! We’ll also have some surprises, including music and art from people in the book.

Drew:  Too many to name! I love both Literati and Nicola’s Books in Ann Arbor, and John King Used books, The Source Booksellers and Pages in Detroit are always wonderful places full of great books and phenomenal, knowledgeable staff.

I have always loved the Detroit Public Library, particularly the main branch—they were a sanctuary to me when I first moved to Detroit, and they will forever hold a special place in my heart.

Drew:  I grew up near my grandparents’ house on Lake Huron. There’s nothing like watching the sun rise over the lake, the fiery, orange ball appearing over all of that fresh water. On any given morning there’s no place I’d rather be.

In Detroit, there’s no beating a bottle of wine and some cheese on Belle Isle, and maybe a pizza at the Motor City Brewing Works after. Polish Village Café and Yemen café, both in Hamtramck, have the best Polish and Yemeni food—and some of the best food anywhere—this side of Warsaw and Sana’a.

Drew:  I really enjoy “boat day” in Port Huron, the start of the annual Port Huron to Macinac sailboat race. The city swells to more than twice its size with all of the visitors, and if the wind is right the boats sail close to shore showing their colorful spinnaker sails.

Drew:  I’m really into the horn playing of young Michigander Marcus Elliot. He’s wicked smart, utterly superlative, and will be a huge star someday. Catch him in Metro Detroit while you can—this guy is going to be huge.

Airea D. Matthews also has a new book of poetry out, Simulacra, via Yale University, which is certain to be mindbending and powerful and unmissable. I eagerly await my copy.

Drew:  Michigan is clearly the finest state in the union, and Detroit is the best city in the US for young artists.

Drew:  Michigander all the way.

Debbie:  Drew, we'll add you to the Michigander column!  Thank you so much for joining us today for Michigander Monday!
Posted by Debbie Diesen at 12:01 AM 2 comments:
Email ThisBlogThis!Share to TwitterShare to FacebookShare to Pinterest
Labels: Drew Philp, Michigander Monday 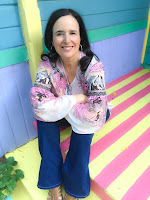 Debbie:  Ruth, please tell us a little about yourself.

Ruth:  I was born in Cuba to a Jewish family and left the island with my parents and my little brother when I was a child. I grew up in a working-class neighborhood in Queens, New York where I attended public schools and spoke Spanish at home. From a young age I loved to write, but I also wanted to travel and that’s what led me to study cultural anthropology. I spent many years traveling to Spain and Mexico before going on to reconnect with Cuba, where I have been building cultural bridges with the United States for over two decades.

In 1986, I settled in Ann Arbor with my husband, David, also an anthropologist, as well as a translator. Our son, Gabriel, was born in Ann Arbor, and though he now lives in New York, he is passionate about his Michigan roots. I have been teaching at the University of Michigan for thirty years. David and I live in a Victorian house in Ann Arbor that is painted in bright Caribbean colors.

Ruth:  My book, Lucky Broken Girl, is my debut novel for young readers. I am thrilled to have been able to write it. The story was inspired by the year I spent in a body cast, confined to my bed, when I was nine going on ten. It was a traumatic experience for me as well as my family. We were immigrants, just arrived from Cuba, penniless and afraid, and suddenly the family had an invalid girl to take care of. Looking back, I realized how painful the situation was for everyone around me who wanted to help me heal. The book brings together those two narratives – the immigrant story and the story of healing from a serious injury – and takes up universal themes of self-acceptance, forgiveness, and learning to embrace the lucky aspects of even the worst things that happen to us in childhood.

Ruth:  I am at work on a new novel for young readers. It is set in Cuba at the time of the revolution. I was inspired by Carson McCullers’s haunting novel, The Member of the Wedding. The story focuses on a twelve-year-old girl who watches jealously as her older sister prepares to marry and is fitted for a beautiful lace honeymoon nightgown sewn to fit her measurements. Then things get more complicated as the revolution brings about dramatic changes and her parents decide to send her out of Cuba to the United States with the Peter Pan Operation.

Ruth:  I have two events coming up in Ann Arbor. I will be doing a reading from Lucky Broken Girl at Literati Bookstore on May 2nd and will participate in Children’s Book Week at Nicola’s Books on May 3rd.

Ruth:  I have many favorite Michigan bookstores! Ann Arbor is filled with the most wonderful bookstores. I miss Shaman Drum and Borders, which were havens when I first arrived in Ann Arbor, but I am thrilled that we have Nicola’s Books and Literati Bookstore, both of which are very supportive of local writers. I buy used books at Dawn Treader Book Shop, which has a great selection of classics and contemporary books. The Ann Arbor Public Library is an amazing resource and organizes terrific events with visiting writers. I’m in awe of the vast holdings at the University of Michigan Library where I can find every book I dream of.

Ruth:  I love the Old West Side in Ann Arbor, where I live. The tree-lined streets become so leafy in the summer it feels like a jungle. But our greatest Michigan treasure, I think, is the Detroit Institute of Art. I’ve gone many times to see the stunning Detroit Industry Murals by Diego Rivera, which were painted between 1932 and 1933 and represent the workers at the Ford Motor Company. Frida Kahlo accompanied her husband Diego Rivera during their stay in Detroit and it was there she painted many of her most important and haunting self-portraits.

Ruth:  The Ann Arbor Summer Festival is a lot of fun. I like the music events at Top of the Park and the outdoor salsa dancing. And while Ann Arborites complain about the inconveniences caused by the yearly Art Fair, I enjoy the carnival atmosphere and the streets filled with people strolling about.

Ruth:  The winters are bad, it’s true, but autumn, spring, and summer are beautiful.

Ruth:  I’m afraid I’m neither. Since I’m not originally from Michigan and come from an immigrant background, plus I’ve traveled so much as an anthropologist, I fear misleading people about my identity if I say I am either a Michigander or a Michiganian. What I usually say is that I’ve been a resident of Michigan for many years and that is where my only child was born.

Debbie:  Ruth, we'll make a brand new column for our tally!  Thank you so much for joining us for Michigander Monday!