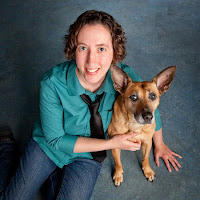 Debbie:  Lisa, please tell us a little about yourself.

Lisa:  I was born in central Michigan, but my family moved to the Kalamazoo area when I was a baby, so that’s what I consider “home.” I graduated from Portage Northern High School and the Kalamazoo Area Mathematics and Science Center before heading out of state for college in 1996. For the past ten years, I’ve lived in the Chicago area, where my day job is being a youth services librarian at a public library. Besides writing, I like making music, doing artsy/craftsy stuff, and hanging out with my dog.

Lisa:  My YA novel is Starting from Here. It’s about a teen girl named Colby who’s coping with the loss of her mother, complicated by her truck driver father’s frequent absences, her trouble applying herself in school, and, most recently, her almost girlfriend’s dumping her for a boy. When a hit-and-run accident leaves a stray dog at her feet, she decides to rescue it. But where there’s hope, there’s potential for heartache, and Colby’s afraid to risk her heart again. The book is set in Kalamazoo, and readers should recognize quite a few locales within the area, though I did make up a few details of my own.

Lisa:  I’m always working on something, but so far nothing’s on the docket for publication. I’m hoping that more of my YA and middle grade books will eventually make it out of the pipeline, however. So far most of them are set in Michigan as well.

- Friday, November 30, 7:30 p.m., at Anderson’s Bookshop in Naperville IL, appearing with several other debut authors from the Apocalypsies, including Michigan’s Laura Ellen

Lisa:  When I was growing up, my favorite Michigan bookstore with John Rollins Booksellers, in part because I could walk to it from home. Unfortunately, it’s no longer around. More recently, my mother has introduced me to Bookbug in Kalamazoo, which is a delightful independent store with a special focus on children’s and YA books. I’m pleased to appear there on November 17.

The Portage Public (now District) Library was another of my favorite haunts when I was growing up. I’d often bike there in the summer. It’s changed greatly since I was a kid, so it no longer feels like “mine,” but I do love Conrad Kaufman’s stunning mural in the children’s room.

Lisa:  The Kalamazoo Institute of Arts ranks very highly. While other kids were sleeping in or watching Saturday morning cartoons, as a kid I was taking art classes. Painting and printmaking were my favorites. Another favorite place is Camp Merrie Woode, the Girl Scout camp outside of Plainwell where I spent portions of every summer from third grade through freshman year of college.

Lisa:  Given my answer to the previous question, it’s probably no surprise that the Kalamazoo Art Fair is one of my favorite events, though living out of state I don’t get to experience it every year. Michigan also has great thunderstorms.

Lisa:  Since I mentioned him earlier, let’s give a shout-out to Conrad Kaufman.  He was rising to prominence as a local artist when I was in high school, and from what I can tell he hasn’t let up since. I wonder if he’s ever considered illustrating children’s books…

Lisa:  Ann Arbor is cool, but it’s not the only cool part of Michigan! This doesn’t happen so much now that I’m back in the Midwest, but when I lived in California, working in academia, I met a surprising number of people who seemed to think the rest of the state was a dull backwater. My guess is they’d only seen the corridor between the Detroit airport and U of M, or they’d know what a beautiful state Michigan is. Also, the Great Lakes do have white caps on windy days!

Debbie:  Last question.  Some folks in Michigan refer to themselves as Michiganders; others Michiganians. For our ongoing vote tally: what's the better term, "Michigander" or "Michiganian"?

Lisa:  No question: Michigander. As a Michigosling born and bred, I should know. Does anyone ever actually say “Michiganian” for this question? They can’t be serious!

Debbie:  We'll add you to the Michigander tally!  Thank you, Lisa, for joining us today for Michigander Monday!
Posted by Debbie Diesen at 12:01 AM
Email ThisBlogThis!Share to TwitterShare to FacebookShare to Pinterest
Labels: Lisa Jenn Bigelow, Michigander Monday

Yay, Lisa! I can't wait to pick up a copy. Sounds like it's a very relatable realistic story.