Debbie:  Merrie, please tell us a little about yourself.

Merrie:  I was born in Mt. Pleasant, lived in Harrison and Midland until moving to Sault Ste Marie while my mom finished her nursing degree -- before we moved to North Carolina for the subsequent 11 years. Then I came back to Michigan for college. I majored in Biological Anthropology at the University of Michigan, and promptly got a job in a library.  Because that's what you do when you don't go to grad school with a BioAnth degree, I guess.  Anyway, I got married somewhere in there, started and didn't finish library school, and wrote some books! I'm also a fifth-generation Michigander, if not sixth/seventh, which blows my mind since I think of the US as such a young country.  My namesake ancestor got married in Holland, MI in the 1840s (Merrie is a family name). 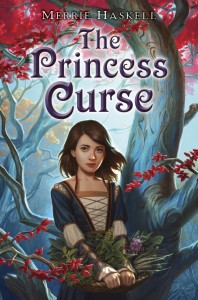 Merrie:  The Princess Curse came out this fall from HarperCollins Children's Books.  It's an "upper tween" retelling of "The Twelve Dancing Princesses" set in medieval Romania.  I'm told it's also a retelling of "Beauty and the Beast" but I swear that wasn't intentional.  The main character is an herbalist's apprentice who is trying to break the curse so she can join a convent and become a master herbalist--but things go awry.  As they do in fiction (and life).  Anyway, if you are a fan of YA or fairy tale retellings, don't shy away from this just because it's marketed to tweens!

Merrie:  I'm under contract for two more books.  I'm just finishing up with the second book (not a sequel) with my editor, and starting work on the third!  The second will be another historical fantasy, this time set in Germany with dragon slayers.  The third is gestating, and doesn't want me to talk about it.

Merrie:  I'm on the verge of getting some scheduled, but don't have any yet -- but my website www.merriehaskell.com will always have the most up-to-date information.

Merrie:  I love Nicola's Books in Ann Arbor -- it's sort of the platonic ideal of an independent bookstore.  And while Crazy Wisdom in Ann Arbor is not solely a bookstore, I love it to pieces and do buy a lot of books there.  I also love Schuler's (I go to the 28th St. location in Grand Rapids all the time in the summer, since it's the closest bookstore to our cottage), since going there hearkens back to the early, pre-corporate days of Borders.  I'm so sad Borders is gone; they had become something other than what they had been, but in the beginning my love for them was unparalleled. Let's just say, an inappropriate proportion of the reasons I chose to come to the University of Michigan had to do with Borders being here.

As for libraries...  I have so many favorites, it's absurd.  First, of course, I love the library I work in -- the Hatcher Graduate Library at the University of Michigan.  It's old and it's big and it's got so much character. Some students here refer to it as Hatcher Graduate Labyrinth, which is spot on.  It's seriously the most fun place, and I learn new things about it every year.  Secret passages! Glowing floors! It's amazing.  I love my hometown library, Saline District Library -- it's just a great small town library. The wooded walking path adjacent to it is icing on the cake.  I spent all my childhood summers in Michigan, and those summers were made much happier by going to the Harrison, Gladwin and Midland libraries, and each of those has a special place in my heart, as well. (I had family in all three towns that I spent time with, and they would all succumb to my begging to go the library sooner or later!).

Merrie:  Tough question!  I practically grew up in the Cedar River in Gladwin.  In it, not on it!  My family used to cajole me: "Come out, your lips are turning blue!"  "Come out, you're going to grow gills!"  I will always love the Cedar above all other places; you can't fight the nostalgia of happy childhood memories. I also spent a lot of time in Higgins Lake as a kid, and I miss it. I am also a huge fan of Gun Lake, where my husband's family have had a cottage for something like seventy-five years.  And of course Mackinac Island.  My mom worked there for a summer before I was born, and had such fond memories of it, so it always seemed like this mysterious, wonderful place, and I just love it.  Especially staying on the Island after the last ferry leaves for the night, and the whole pace and tenor drop a level, and you can see the locals breathe a little easier.  I mean, we're still tourists and we're still there, but it's calmer, and you get a brief sense of how it might be as a small town.  I have recently noticed that I have a huge attraction to tourist towns, which I have decided to embrace, and no longer deny. Mackinac Island, Mackinaw City, Saugatuck...  (And numerous tourist towns other places, too!)

Merrie:  Even though I live in Saline, I have lived in or near Ann Arbor since I was 19, and have worked in Ann Arbor all my adult life.  And I, like most Ann Arborites, have a love/hate relationship with the art fairs.  Mostly love, at this point, though; I like to get over-priced street food with a friend and people-watch.  Delicious and educational!

Merrie:  Well, even though I write children's books now, I started out in science fiction short stories, so most of my writer acquaintances are from the sci-fi/fantasy side of things.  So, I commend to you Jim C. Hines, who writes fantasy books and has a new series coming up that I believe is set in a library in the UP.  Jim and I have one of those "It's a small state!" stories, because before we met as writers, I used to play paintball with his sister-in-law.  And Saladin Ahmed, a fellow historical fantasy writer who just returned to Michigan after some time away.  And Pearl North, who has an amazing YA series about a library/labyrinth (a concept near and dear to my heart).  And I also have to commend our local small press, Subterranean Press, and the fine folks there are supporting really great genre work .  I have no affiliation with them, they're just cool people.

Merrie:  a) There's a lot more going on in Detroit than pictures of ruined buildings.  b) We're in the Eastern Time Zone!  Really!!  c) There is really nothing like a Michigan summer day on a lake.  Nothing like it.

Debbie:  Last question:  Some folks in Michigan refer to themselves as Michiganders; others Michiganians. For our ongoing vote tally: are you a "Michigander" or a "Michiganian"?

Merrie:  Michigander, definitely!  My grandfather taught me Michigander when I was a little kid; he never looked kindly on that other word.

Debbie:  We'll put you in the Michigander column!  Merrie, thank you very much for being here today!

To learn more about Merrie, her book, and her stories, head over to her web site and her blog.  You can also find her on Twitter; and over on FaceBook there's a page for her book The Princess Curse.
Posted by Debbie Diesen at 12:01 AM
Email ThisBlogThis!Share to TwitterShare to FacebookShare to Pinterest
Labels: Merrie Haskell, Michigander Monday

Great interview Merrie and Debbie. I'm so excited to read Merrie's book after learning she lives in Saline. I'd love to work in a library too.

What a nice interview. And thanks for letting me know about Merrie's new book.

Congratulations on the book! And as someone who grew up in Gaylord, I can certainly agree that there is nothing like a summer day on a lake in Michigan.